Once I had put a few songs together it was time to find some people who would like to hear me play. I saw a poster in the window of a new venue in Camden Town called The Green Note. There I met Steve and Siobhan who ran the show with energy, enthusiasm and expertise. Caring, empathetic and well organised; the dynamic duo were there to ensure that things were organised and spirits were kept high.

There were fantastic regulars – Alan, Jerry and Jake – each with an individual style and appeal that enticed listeners to keep coming back. Alan always played the same plodding thumb tunes on the guitar and wrote a new song every week. Jerry would strangely dance his way through his own unique brand of country rock n, roll wearing Steven Tyler's old wardrobe. Jake would play Richard Thompson songs better than Thompson could play them himself. David had the folk guitar and Greg had the raspy voice.

What can be learnt from these regular musicians - each of different background, each of varying experience and musical knowledge - is simple and beautiful. When people get in a room once a week and speak the same language something magical happens. Laughter, tears, human beings being wonderful human beings. The language is music and the weekly room is the room advertised by the poster saying OPEN MIC. 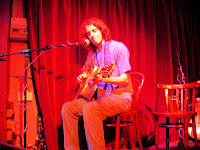 Here's a picture of me playing at the Green Note in 2006. For the latest news on the London Open Mic circuit ask Alan who usually knows where's good.
Posted by Dan Sandman at 04:50 No comments: